The Russian army started the war in Ukraine with an offensive strategy along 4 directions. 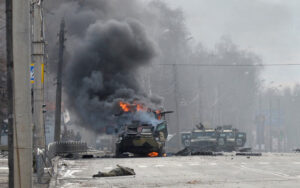 The Russian army started the war in Ukraine with an offensive strategy along 4 directions. The first direction was from Belarus (north), and the Russians were repulsed and had to leave the region. The second offensive direction was from the Chernihiv and Sumy regions (east), where the Russians were repulsed and were forced to leave the area due to significant losses. The third direction was in the south, in the Odesa region, where Russian Navy vessels were damaged and the flagship Moscow sank, and the Russians pulled back from this area, as well. The fourth direction is the southeast, where currently, occupiers have concentrated all their remaining forces. Recognizing the failure to achieve their offensive goals in three of their four planned directions, Russia wants, at minimum, to gain some victory in the Donbas region by the essential Victory Day holiday on May 9. It appears that, for all their apparent strength, Russia will not be able to accomplish even that. According to the UK, US, and Ukraine intelligence services, a number of Russian commanders were arrested recently, and some of them were even executed for failure in the execution of Putin’s plans. We all thought Ukraine was fighting against the 2nd largest and most powerful army in the world, however, we are not. After the last two months, the world sees that we are fighting an army that is not even in the top 20.