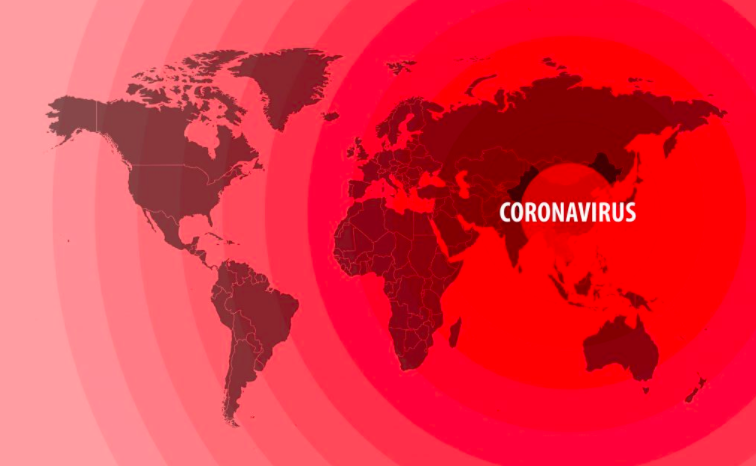 Ukraine’s GDP to Shrink This Year by 4-9%...US, Germany, Asia Face Severe Downturns...IMF May Boost Aid to Ukraine by 50%...From Kyiv to New York: Backlash Starts Against Shutting Down Economies...Back to the USSR: Ukraine Has One Airport and Outbound Tourism is Banned

Ukraine’s economy will shrink this year by 5% “in an optimistic scenario,” Yulia Kovaliv, deputy head of President’s Zelenskiy’s office, told a COVID-19 online discussion hosted Monday by the European Business Association. Fighting the virus will also cause Ukraine’s budget deficit to more than triple this year, 2.1% to 7% of GDP.

Separately, Tomas Fiala, EBA President, predicts two scenarios for Ukraine’s economic performance this year: a 4% drop if the quarantine is over by June, and 9% if it lasts longer. In the first scenario, the exchange rate would drop to 30 hryvnia to the dollar, inflation would be 5% and unemployment would rise. In the second scenario, the exchange rate would move to 35 hryvnia to the dollar and inflation would increase. Fiala who is president of Dragon Capital, spoke Friday night on the Freedom of Speech TV talk show.

Behind the gloomy forecasts are gloomy reports from the world’s largest economies.

“Top Economists See Echoes of Depression in U.S. Sudden Stop,” headlines Bloomberg. “The economy is headed toward its worst quarter in records since 1947. JPMorgan Chase & Co. expects gross domestic product to shrink at an annualized rate of 14% in the April-June period while Bank of America Corp. and Oxford Economics both see a 12% drop. Goldman Sachs Group Inc. sees a 24% plunge.”

Germany, the EU’s largest economy, could contract by 7 to 20 percentage points this year, depending on the length and breadth of coronavirus restrictions, forecasts Munich’s ifo Institute for Economic Research. Today, the Bundestag is to review a €156 billion aid package to Germany companies and workers.

The Asia-Pacific region is expecting a wave of corporate bankruptcies, reports the Financial Times. In the last decade, corporate debt there has doubled to $32 trillion. In the world tourism industry, losses from coronavirus can reach $1 trillion by the end of 2020, says Bulut Bagchi, president of the World Economic Forum.

Losses from the coronavirus pandemic have already exceeded the damage from the global financial crises of 2008 and of the September 11 2001 attacks, Jose Angel Gurria, Secretary General of the OECD tells the BBC. He says: “Even if there is no global recession, we will get either zero or negative growth in many countries of the world, including the largest. Because of this, global growth will not only be low this year, but will also be restored for a long time.”

Coronavirus could cause a global recession this year worse than the global financial crisis of 2008-2009, the IMF predicted Monday. The IMF now expects “a recession at least as bad as during the global financial crisis or worse,” IMF Managing Director Kristalina Georgieva said after a conference call of finance ministers and central bankers from the Group of 20 of the world’s largest economies. “The economic impact is and will be severe, but the faster the virus stops, the quicker and stronger the recovery will be.”

Georgieva said the IMF is ready to allocate up to $1 trillion of loans. She said about 80 countries have  turned to the fund for help.

On Sunday President Zelenskiy talked with Georgieva by telephone and proposed to nearly double the tentative $5.5 billion aid program to Ukraine, Kovaliv said Monday. Bloomberg reports that the new total could be $8 billion. Ihor Umanskyi tells Bloomberg that an agreement is nearly complete. Other sources say the IMF has signed off on the draft text of a bill to ring fence PrivatBank from its former owners, notably Ihor Kolomoisky. Georgieva tweeted after her talk with Zelenskiy: “I had a very constructive conversation with President Zelenskiy today, and expressed our support for Ukraine as the country confronts the tremendous challenges caused by COVID-19.”

With the financial crisis, Ukraine’s back is to the wall, Anders Aslund writes in an Atlantic Council essay titled “Ukraine Urgently Needs a New IMF Agreement.” Noting that in the last month, yields on Ukraine’s longterm Eurobonds have jumped from 4% a year to 14%, he writes: “Neither Ukraine’s government nor its enterprises can borrow on the private market any longer…There is no other realistic choice. The IMF offers both the seal of approval and access to the international financial market. Forget sheikhs from the Persian Gulf or Russian oligarchs!”

Today’s official exchange rate is 28.11 hryvnia to the dollar, 11% below the March 9 level of 25.03. Despite the gradual, daily slide in the currency, the National Bank of Ukraine said Monday that demand for dollars is tapering off. On Monday, the bank sold $50 million, a small amount compared to the $222 million daily average of the nine previous banking days.

Pushback is forming to resist moves to shut down Ukraine’s economy to contain the new flu virus.

“Shutdown of most non-strategic enterprises is premature and could cause a catastrophic blow to the economy of Ukraine” warns a joint statement signed by leaders of the European Business Association, the Union of Ukrainian Entrepreneurs, the Federation of Employers, the Ukrainian Club of Agrarian Business, the IT Ukraine Association, Business 100, and the CEO Club. “Countries where the number of cases per million people exceeds Ukraine’s indicators by a hundred times (Germany – 286 patients per million people, the Netherlands – 246, Sweden – 191), use only part of the measures introduced by Ukraine.”

“The mass stopping of enterprises by the state is suicide for the economy,” Timofei Milovanov, former Economiy minister, warns  on Facebook. “The intervention of the state must be justified and surgical. And finally, the mass stop of the economy will quite quickly lead not only to the deepening of the economic crisis, but also to public protests and political crisis.”

From the New York, The Wall Street Journal warns of “a tsunami of economic destruction that will cause tens of millions to lose their jobs as commerce and production simply cease…there is no amount of money that can make up for losses of the magnitude we are facing if this extends for several more weeks.” The Journal’s influential editorial page says quarantine policies must be finetuned to “include strict measures to isolate and protect the most vulnerable—our elderly and those with underlying medical problems.” The editorial concludes: “No society can safeguard public health for long at the cost of its overall economic health.”

For the first time in a century, Ukraine has only one functioning airport today — Kyiv Boryspil. In a ban reminiscent of Soviet days, Ukrainians now are prohibited from taking tourists flights out of the country. With Kyiv Boryspil a ghost town, Terminal D is closed and the few arriving planes go to Terminal B, the original Soviet terminal. SkyBus service and Boryspil Express trains have stopped.

Largely for Americans, UIA, the national flag carrier, will operate two ‘last’ flights home tomorrow and Friday, from Kyiv Boryspil to New York’s JFK. Although one-way tickets were priced at $1,800, tomorrow’s flight sold out. From New York, there are seats on another ‘last’ flight, on Saturday March 28. UIA’s website indicates the airline hopes to resume regular service on Saturday April 4.

Almost half of Ukraine’s 73 confirmed coronavirus cases are in Kyiv City and Region, the Health Ministry reports. Of the 24 confirmed cases in Kyiv City, 22 are people who returned home from foreign travel, principally from France, Spain and Germany. Of the 24, 13 are hospitalized and 11 are in self-isolation at home, under the supervision of a doctor, Mayor Vitaliy Klitschko told reporters Monday.

From the Editor: Before political leaders drive the world economy off a cliff, someone needs to hit the brakes, take a deep breath, and take a rational look at mortality figures. So far, COVID-19 has killed 16,000 people worldwide. By comparison, recent death tolls from the flu seasons in the United States were: 34,200 last winter and 61,000 in the 2017-2018 winter. So far, three Ukrainians are known to have died in Ukraine from COVID-19. By contrast, 3,454 Ukrainians were killed in car accidents last year, almost half of them pedestrians. I do not want to minimize COVID-19, but the 3-5% mortality rate does not put it on a par with Ebola or the Black Plague. We do not have to shut down an entire economy to stamp out this new bug. With Best Regards, Jim Brooke jbrooke@ubn.news