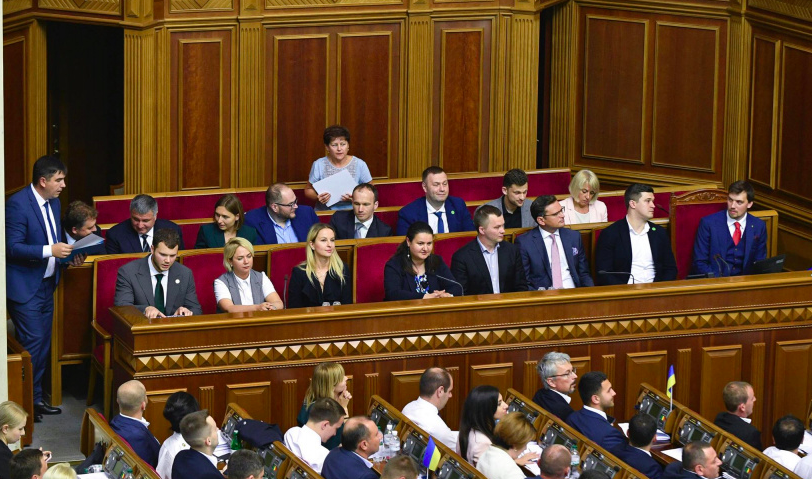 After six months of on the job, Prime Minister Honcharuk was sacked by President Zelenskiy in a cabinet shake up that cost two thirds of the 17 cabinet ministers their jobs. Valuing experience over youth, Zelenskiy and his Servant of the People party chose little known names. Foreign investors, diplomats and the IMF lose three well known interlocutors: Prime Minister Honcharuk, Finance Minister Markarova and Economy Minister Milovanov. Today, the Rada is to vote to let go Prosecutor General Ruslan Riaboshapka for failing to authorize a notice of suspicion to ex-President Petro Poroshenko.

Prime Minister: Denys Shmygal, a 44-year-old former DTEK executive, who served in the Zelenskiy government as governor of Ivano-Frankivsk Oblast and, for the last month, as a deputy prime minister and minister for Development of Local Communities. According to an Interfax-Ukraine biography Shmygal has held 11 jobs in the last 16 years.

Economy Minister and Agriculture Minister: Open. Zelenskiy decided to split the two ministries, after merging them in September. Milovanov declined to stay on as Agriculture Minister. The leading candidate for Economy Minister is Roman Zhukovsky, aged 41, reports Interfax-Ukraine. He held economic posts in the Yuschenko and Yanukovych governments, and was also a member of the Naftogaz Supervisory Board.

Addressing the Rada, Zelenskiy said the new Cabinet will be charged with revving up the economy and reversing industrial decline. He complained: “The industrial glory of Ukraine is gradually becoming a memory.” Industrial production in January was down 5% y-o-y, partly due to the mild winter and decrease in gas and coal. In a swipe at Honcharuk, aged 35, Zelenskiy said: “This is a government of new faces, but faces are not enough,” Zelenskiy said. “New brains and new hearts are needed.”

Zelenskiy harshly criticized the new Customs Service, saying it has not ended smuggling and has not raised customs revenue since it opened last fall. He said: “This needs to be changed: Customs should not collect likes on Facebook, but funds to the state budget, and we must start working.” In a swipe at foreigners on the supervisory boards of state-run companies, the president complained that Ukrainians feel like a minority on the boards.

In his debut address to the Rada, Prime Minister Shmygal promised to “revise the state budget for 2020 in terms of increasing payments and pensions for ordinary Ukrainians.” He promised to cut salaries of high government officials and to make the economy grow by implementing “strategic reforms for the next several years.” The Rada is halfway through reviewing 4,000 amendments to a modest farm land market bill. The government has yet to win approval of a bill to ban the return of nationalized banks to their former owners – a key demand by the IMF for a deal.

Reviews of the Cabinet purge are largely negative.

Andy Hunder, president of the American Chamber of Commerce in Ukraine, tweets: “The timing couldn’t have come at a worse moment for Ukraine, with the coronavirus outbreak, a global market downturn, no IMF deal, secondary market bondholders becoming itchy, and significant sovereign debt repayments due.”

Melinda Haring, deputy director of the Eurasia Center at the Atlantic Council, tweets from Washington: “Time to sound the alarm in Kyiv. Things look bloody awful.” She shared a link to her new essay “Ze end?” “Ukraine has capable, proven ministers. Why change them now?,” she asks. “Roman Zhukovskyy is set to take over the Ministry of Economy, which bodes ill. His mother is the financial manager to the notorious oligarch Dmytro Firtash. Ihor Umansky, [new] head of the Ministry of Finance, fiercely opposes working with the International Monetary Fund.”

Timothy Ash writes from London: “[It is] likely that reform agenda will now be watered down…For bondholders, the worry now will be what Umansky thinks of foreign portfolio investors who pumped $5 billion into Ukraine under Markarova. This was criticized for strengthening the hryvnia and hurting oligarchic interests. If bondholders hit the exits, it could get ugly very quickly with a large number of investors trying to get through a very small door in an over positioned trade.”

Kateryna Glazkova, executive director of the Union of Ukrainian Entrepreneurs, tells Interfax Ukraine:  “Unpredictability, a change in the government’s strategy, is something that the business would definitely not want. It is important for our business community that the renewal of the Cabinet of Ministers does not affect the implementation of systemic changes, and the course of reforms does not change.”

Ukrposhta plans to double its revenue this year, to $650 million, and to increase its investments 20-fold, to $65 million, Igor Smelyansky, director general of the state postal service, writes on Facebook. Through the purchase of 500 mobile post offices, Ukrposhta plans to extend internet postal banking and postal services to 25,000 settlements. This year, Ukrposhta will open 40 mini post offices in shopping centers and build its first new sorting center since 1980. The goal is to build eight automated sorting centers. “Starting this year, we no longer survive — we build a new, successful company,” says Smelyansky. He predicts that the government-regulated services in the company’s revenue stream will shift from 50% to 9%.

Fresh from announcing Wizz Air Abu Dhabi, József Váradi, Wizz Air’s CEO, met in Kyiv Tuesday with Infrastructure Minister Vladislav Krikliy to discuss starting domestic flights and expanding international flights beyond the 30 EU cities already served from Ukraine. “The Ukrainian airline market is strategically important for the company and Wizz Air is working on plans to expand its presence,” said Váradi, a co-founder of the low cost airline. Krikliy said the government’s goal this year is to increase the low cost share of Ukraine’s aviation market to 45%. On Monday, Wizz Air starts a 3-month suspension of flights from Odesa to its six EU destinations due to runway and apron work.

On Tuesday, Windrose Airlines started a daily flight between Kyiv Boryspil and Odesa. In May, the airline will fly this 80-minute hop three times a day. Next month, Windrose starts flights from Kyiv to four more Ukrainian cities: Dnipro, Kharkiv, Lviv, and Mykolaiv. In the fall, Ivano-Frankivsk and Kriviy Rih will be added to this Boryspil hub and spoke network. Aiming to carry 250,000 domestic passengers this year, Windrose is negotiating with Boryspil a domestic transfer area that would allow passengers to switch planes without repeating security checks. With eight ATR-72 commuter turboprops to join the Windrose fleet over the next year, the airline plans to increase passengers by 25%, to 1.8 million, Vladimir Kamenchuk, Windrose CEO tells the Center for Transportation Strategies.

From the Editor: A cabinet shakeup after six months on the job is the wrong move. The start of an administration, when elections are years away, is the time to make the painful reforms that yield economic growth down the road. The President complains that his government is unpopular in the polls. Yawn. What else is new in Ukraine? Would the President prefer the reverse — that the Prime Minister would be more popular than he? With Best Regards, Jim Brooke jbrooke@ubn.news