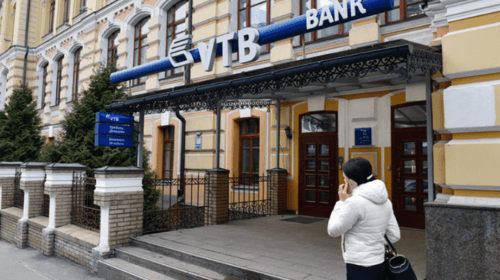 Ukraine plans to leverage the $750 million in World Bank guarantees to raise $1 billion of foreign borrowings in two tranches – $400 million in the next 10 days and $600 million next month, Finance Minister Oksana Markarova tells Interfax-Ukraine. On Tuesday, Cabinet of Ministers capped the annual interest rate at 4.9%. Deutsche Bank AG and TMF Global Service (UK) Ltd are to syndicate the loans, earning a commission of 0.8% of the totals, Interfax-Ukraine reports.

The first tranche of IMF money — $1.38 billion – is to be disbursed ‘immediately.’ But the next two tranches – probably of $1.24 billion each – depend on Ukraine passing two semi-annual reviews, the first after the expected April 21 presidential runoff election, and the second after the fall parliamentary elections. For this program, the 10th in Ukraine’s history, the IMF lists key markers: reducing the public debt, reducing inflation at a flexible exchange rate regime, strengthening the financial sector and real improvements in tax administration, privatization, governance, and anti-corruption.

Noting that the next two tranches “are not secured,” Concorde Capital’s Alexander Paraschiy writes: “Their provision will depend on Ukraine’s willingness to continue cooperation with the Fund, which will depend upon the result of this spring’s presidential elections, in our view. In particular, it will be important for the Fund that power brokers protect the institutional independence of Ukraine’s central bank…maintaining IMF cooperation will be important for the country to get smoothly through 2020 when repayments of international debt are not much smaller than in 2019.”

Dragon writes of the IMF program, which is to last through February 2020: “Continued cooperation with the Fund would also anchor domestic economic policies and help preserve macroeconomic stability during the turbulent election period and amid rising external pressures.”

Following one IMF recommendation, the government is dividing the State Fiscal Service into the State Tax Service and the State Customs Service, the Finance Ministry reports. Deputy Finance Minister Serhiy Verlanov says the division “will create the basis for the demilitarization of tax authorities, improve the quality of services provided to taxpayers, increase the transparency and accountability of work of tax and customs authorities.”

GDP growth in July-September was 2.8% compared to the same third quarter of 2017, reports the State Statistics Service. The IMF forecasts Ukraine’s GDP will grow this year by 3.3%, near the National Bank of Ukraine’s forecast of 3.4%. Ukraine’s state budgets for 2018 and 2019 are based on GDP growth forecasts of 3% annually. 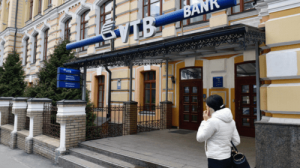 The Deposit Guarantee Fund has started to liquidate VTB Bank, the Ukraine unit of Moscow’s VTB, a state-owned bank. Liquidation started after the National Bank of Ukraine blocked the bank’s sale, alleging procedural violations by Ukrainian banks interested in buying what once was one of the top 20 banks here.

Under liquidation, depositors have until the end of January to apply to the Fund to get their money back. Deposits up to the insured limit — $7,150 — are to be paid in full. This will cover 97% of depositors or 59,108 people, the Fund calculates. But this will cover only a quarter of the total $131 million on deposit. The other depositors are not to be paid more than the insured limit. Alexander Shevchenko was appointed a liquidator of the bank, a process expected to take two years.

Russia’s two other big banks here, Sberbank and VEB, “are winding down their business,” in Ukraine, Yakiv Smoliy, governor of the central bank, told Reuters in an interview two weeks ago. Until Russia’s military attacks on Ukraine in 2014, the three banks were among the top 15 lenders in Ukraine.

To relieve Russia’s maritime blockade of Mariupol, Ukraine’s main Azov seaport, Ukrzaliznytsia has increased its freight trains by 50%, to 24 trains a day, the state railroad reports. With freight trains running hourly along the 300 km route between Mariupol and Zaporizhia, the steel exports of Mariupol’s main employer, Metinvest, are reaching the Black Sea ports of Kherson and Mykolaiv. Concorde Capital’s Dmytro Khoroshun writes: “The increase of throughput to 24-28 trains per day should allow Metinvest to redirect its entire product volume currently being transported through the Azov Sea to Black Sea ports in case of an escalation of the Azov Sea blockage by Russia.” FMO, Holland’s development bank, is lending $10 million to Nibulon, the grain trader, to improve its use of river barges and ports. By 2021, Nibulon, the largest user of river transport in Ukraine, wants to move 4 million tons of grain by river – the equivalent of 100,000 truck trips. Dutch companies want to participate in the rebuilding Soviet-era river locks on the Dnipro, once the Mississippi of Ukraine.

Belarus and Ukraine are taking steps to restore river navigation on their shared river, the Dnipro. On Monday, Ukraine’s Sea Ports Administration signed an agreement with Beltopenergo, a Belarus oil trading company involved in constructing a commercial port at Nizhnia Zharia, a Belarusian village10 kilometers north of the confluence of the Dnipro and the Pripyat. Beltopenergo is to report on potential cargo flows and vessel sizes. The Ukrainian side is to study needed dredging depths. The entire 700 km length of the Dnipro in eastern Belarus is navigable. From Belarus, the river runs 1,100 km south through Ukraine to the Black Sea.