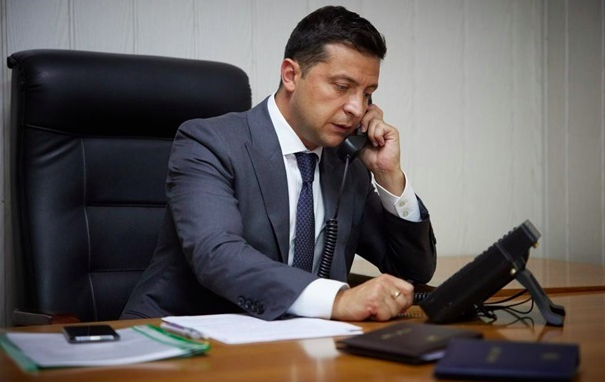 Ze Promises to Meet IMF Demands...Big Eurobonds by Christmas?...Reform Face Big Setback At State Arms Conglomerate...Turkey Blocks Russia in the Region...Aid for Roads and Rail Will Cut Isolation of Donbas...US Gives Aid to Protect Shipping in the Azov

The day after speaking with the IMF Managing Director in Washington, President Zelenskiy made a video call to the G-7 ambassadors in Kyiv and promised to deliver on the IMF’s checklist. By the end of December, he promises to restore criminal liability for officials who falsify their asset declarations, to keep Artem Sytnyk as head of the Anti-Graft Bureau, and to “resolve issues of the Constitutional Court.” The Rada returns on December 1st. It is not clear if the President has the votes to pass the necessary bills. IMF MD Kristalina Georgieva tweeted after her talk with Zelenskiy: “Full agreement on actions needed prior to program review.”

The EU is ready to provide €1.2 billion in aid to Ukraine – if Ukraine complies with a list of conditions similar to the IMF’s list. Matti Maasikas, head of the EU delegation to Ukraine, tweeted this message yesterday after meeting with Yuriy Aristov, head of the Rada Budget Committee. Maasikas said: “The fiscal challenges facing Ukraine are huge, and the EU is ready to provide macro-financial assistance under well known conditions.”

Concorde Capital’s Evgeniya Akhtyrko writes of Zelenskiy’s Tuesday night call: “The key question: is what was the purpose of the call? Considering that no IMF tranche will emerge in the nearest couple of months, and amid the high financing needs of Ukraine’s state budget till the end of 2020, we believe this was a cheer up call for Ukraine’s potential external lenders. Namely, we continue to expect the government will try to market a new Eurobond soon.”

Separately, Mustafa Nayyem, UkrOboronProm’s Deputy Director-General, wrote Wednesday on Facebook of what looks like another counter-revolution for Ukraine. Of the takeover by the new Ministry last summer, he wrote: “We agreed in the hope of finding partners and like-minded reformers. Unfortunately, that was not the case. Instead of partnership, we faced systemic protraction in the development of strategic documents, the blocking of our draft bill and the reform as a whole.”

This critique was echoed by Canadian-American arms expert Lada Roslycky who wrote  on Wednesday in Vox Ukraine that the new Ministry of Strategic Industries is a “communist construct dating back to Soviet times.” With only seven employees, this ‘super ministry’ seems designed to block reform and exploit lucrative opportunities in a notoriously corrupt industry, critics charge.

While Western companies stay on the sidelines, Turkish arms manufacturers build joint ventures with Ukraine for drones, surface-to-air missile systems, military communications, tank protection systems and corvettes, Can Kasapoglu wrote in The Jamestown Foundation a piece titled: “Turkey and Ukraine Boost Mutual Defense Ties.” “Turkish-Ukrainian strategic ties look poised to bring about a new geopolitical reality in the Black Sea region,” Kasapoglu writes from Istanbul where he directs defense programs at the EDAM thinktank. Comparing Ukraine’s cooperation with Turkey to that of Israel and South Korea, he concludes: “Ukraine stands to become another important partner of this type, but with the additional political-military value of helping Turkey counter-balance Russia in the Black Sea.”

Azerbaijan’s victory in the 44-day war with Armenia thrusts Turkey into the spotlight as an increasingly muscular regional player, Taras Kuzio, a Kyiv-Mohyla Academy Professor, writing for the Royal United Services Institute for Defence and Security Studies. “Ukraine and Azerbaijan are longstanding pro-NATO and pro-Western former Soviet states in a contested region which Russia demands the West recognises as its exclusive sphere of influence,” he writes for the venerable London think tank. “While the Azerbaijani–Turkish alliance has passed an important test of endurance, Turkey’s development of a new strategic alliance with Ukraine is in its embryonic days.”

UIA will resume flying to Yerevan, Armenia on December 4th. Flights were suspended two months ago because of the war between Armenia and Azerbaijan over Nagorno-Karabakh, about 250 km to the east of Yerevan. On November 10, a Moscow-brokered ceasefire stopped the fighting. Russian military peacekeepers and Turkish military observers are to monitor the ceasefire.

Rebuilding roads in Ukraine-controlled Donbas is the goal of a two new soft loans totaling €155 million, reported the Infrastructure Ministry. The World Bank is lending $65 million as part of its project: ‘Eastern Ukraine: Reunification, Restoration and Revival.’ The European Investment Bank is lending €100 million also largely for road repair and construction.

To further reduce the isolation of Luhansk and to protect the new roads, the Rada’s Transport Committee endorsed the construction of a rail line that would connect a 250 rail line in eastern Luhansk that is cut off from Ukraine’s rail system. Largely useless today, line runs south from the Russian border, near Lantrativka to Kondrashevskaya-Novaya and on to Russia-controlled Luhansk. Earlier this year, France offered to finance €100 million worth of railroad construction in Ukraine-controlled Luhansk.

The US is giving $4 million in aid to bolster Ukrainian Sea Guard units in Berdyansk and Mariupol. The US Embassy Twitter feed said: “The new equipment will help the Marine Guard deter and respond to aggression in the Sea of Azov around the clock.” The Sea of Azov is a binational body of water. After Russia opened the Kerch Strait Bridge in May 2018, Russian border control forces started stopping and delaying civilian ships going to Ukrainian ports. Last July, Washington approved the sale of up to 16 Mark VI patrol boats to Ukraine. The boats are designed to patrol coastal areas. The Sea Guards are part of Ukraine’s Border Control Service.

Through October, Mariupol port has handled 5.1 million tons of cargo, up by almost 10% over the level for the first 10 months of last year. Taking advantage of rail freight incentives to use the port, shippers sent 26% more ferrous metals and 35% more grain, reported the Sea Port.

Editor’s Note: Three weeks after the head of the IMF clearly asked President Zelenskiy not to touch the National Bank of Ukraine, he purged the central bank. Now, six month later, the president is back, asking the IMF for help. Bulgarians and Ukrainians know each other. There is not a lot of razzle dazzle the 42-year-old performer from Kryvyi Rih can use to impress the stolid, 67-year-old economist from Sofia. (She may listen on the phone, thinking: ‘I’m old enough to be your mother!’) With the IMF apparently in no rush to send more Western taxpayers’ money to Ukraine, the logjam may last until Joe Biden focuses on Ukraine — and unleashes his long-awaited tough love. With Best Regards, Jim Brooke 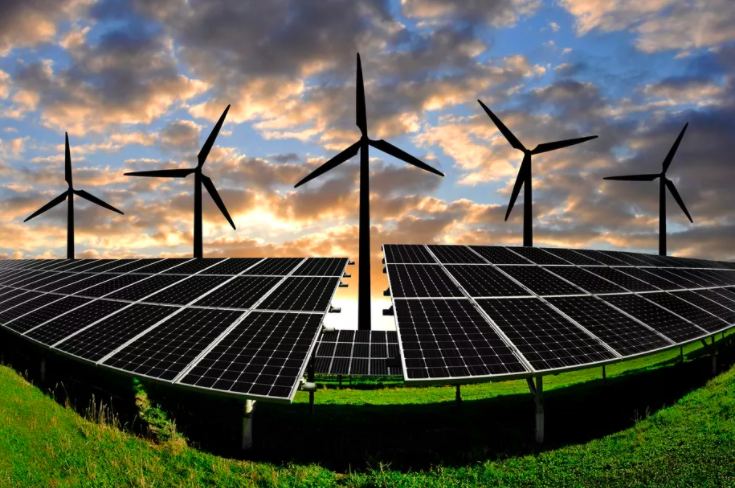 Ukraine’s big debt to foreign investors in wind and solar energy threatens future foreign investment in other areas, the Ambassadors of 11 OECD countries warned Prime Minister Shmyhal in a letter Friday. Saying they represents companies and banks that invested more than €2 billion in renewables in Ukraine, the Ambassadors said the government now is “in breach” of the “voluntary” agreement reached last July with producers.

“To attract investors, and indeed to keep existing investors, Ukraine needs a stable and predictable business climate that builds confidence in Ukraine as an attractive investment destination,” reads the one-page letter signed by the Ambassadors of Britain, Belgium, Canada, Denmark, France, Germany, the Netherlands, Norway, South Korea, Sweden, and Turkey. “The extent to which Ukraine honors its commitments…will be noted by investors far beyond the renewable energy sector.”

With the overdue electricity bill estimated at $800 million, the Ambassadors said the government has not yet moved to use budget money to pay for 20% of the bill and to pay the rest through hryvnia bonds. Under pressure from bankers, about 50 renewable producers have sued to get their money from the Guaranteed Buyer State Enterprise, reports Censor.Net. On Nov. 4, the week after the local elections, the Rada approved on first reading a bill that would give state guarantees to Ukrenergo to allow it sell bonds.

Despite the overdue power bill and cuts in solar rates of 10-15%, new solar projects continue to be commissioned across Ukraine:

In Kyiv, DTEK Grids has connected its first industrial size solar plant atop an apartment building. Built by the Avrora Term Company the array atop a building in Troieshchyna has 1,200 solar panels and output of 330kW. Ivan Geliukh, DTEK Grids CEO, says that this year the company is connecting 75 industrial solar power plants for a total capacity of 566 MW.

In Izmail, on the Danube, UDP Renewables puts into operation this month two stages of Gudzovka-Solar, a €21 million, 24.4 MW investment. Mykola Tymoshchuk, CEO of UFuture, investor in UDP, says: “Despite the turbulent period in the industry and in the world at large, UFuture is systematically implementing its strategic plans and investments in Ukraine’s renewable energy.”

In Zhytomyr region, Naftogaz starts producing and selling electricity this month from its new 33.3 MW plant at Chudniv. Implemented by Naftogaz-Energoservice, the project is to be followed by more solar stations next year, says Serhiy Pereloma, first deputy board chairman of Naftogaz.

In Sumy region, Germany’s Nord Areal Energy GmbH has started construction of a 6 MW solar plant in Trostyanets. About 100km to the northwest in Bilopillya, the same German company plans to build a major wind farm, reports Panorama, a Sumy region news site.

Germany is offering to €20 million to a new, international fund to convert six single industry Ukrainian coal mining towns to new uses, Peter Altmaier, Germany’s minister for Economic Affairs and Energy, said last month after talks last month with Olha Buslavets, Ukraine’s minister for Energy and Environmental Protection. Choosing one town in the West and another in the East, planners believe Velykomostivska in Lviv has potential as a tourism center and a Donetsk mine known as “5/6” has potential as a technological cluster.

Adoption of a transparently regulated taxi market in Ukraine would bring the business out of the shadows, allowing companies to help drivers buy or lease better cars, Georgy Sokolyansky, Uber’s development director for Central and Eastern Europe told an online discussion on the taxi market yesterday. Estimating that 90-95% of drivers are in the ‘shadows,’ he said legalization would ultimately create “100,000 jobs in Ukraine.”

Ukraine says Iran is dragging its feet on investigating the downing of the UIA passenger jet last January by not sharing information and not responding to requests for cooperation., Deputy Prosecutor General Gyunduz Mamedov tells Reuters. Iran has also rejected Kyiv’s calls for life sentences for the Revolutionary Guards officers responsible for shooting down the plane, killing 176 people. In advance of talks on Dec. 3, a governing panel at the United Nations’ aviation agency urges Iran to speed up its investigation.

About $110 million will be invested next year in 10 regional airports, largely for runway and navigational improvements, according to Kirill Khomyakov, head of Ukrinfraproekt, the State Agency for Infrastructure Projects. According to an Agency map posted by the Center for Transportation Strategies, the airports are: Kherson, Cherkassy, ​​Rivne, Vinnitsa, Uzhgorod, Ivano-Frankovsk, Chernivtsi, Poltava, Odessa and Dnipro. During the recent local election campaign, President Zelenskiy also promised to rebuild the runway at Sumy’s airport.

Editor’s Note:  For sophisticates who smirk at the sound of ‘Sumy Airport,’ faithful UBN reader Greg Perelman emails me a blast from Ukraine’s aviation past: the summer 1976 schedule for flights to seven cities from Zvenihorodka, Cherkasy region. “The prices were similar to the cost of bus tickets to the same destinations,” recalls Greg, now a Yale MBA living in the San Francisco Bay area. “I believe all of them were on An-2s – the same plane I flew from Korsun to Zhuliany in late ‘60s.” The round, rugged An-2 biplane was nicknamed the ‘kukuruznik’ — corn cob. With Best Regards, Jim Brooke