An unprecedented lockdown for Ukraine and other countries, border closure, and a massive panic over COVID-19 pandemic, minimized already weak investment inflow to the country’s economy.

By the end of 2020, capital investment in Ukraine shrunk by 38.2% hitting Kherson, Zakarpattya, Kyiv, Lviv and Mykolaiv oblasts the most, according to the State Statistics Service.

“The level of investment into (Ukrainian) economy, which was low itself before the corona crisis (up to 18% of Gross Domestic Product), deteriorated significantly during the crisis,” said Bohdan Danylyshyn, chairman of the Council at the National Bank of Ukraine 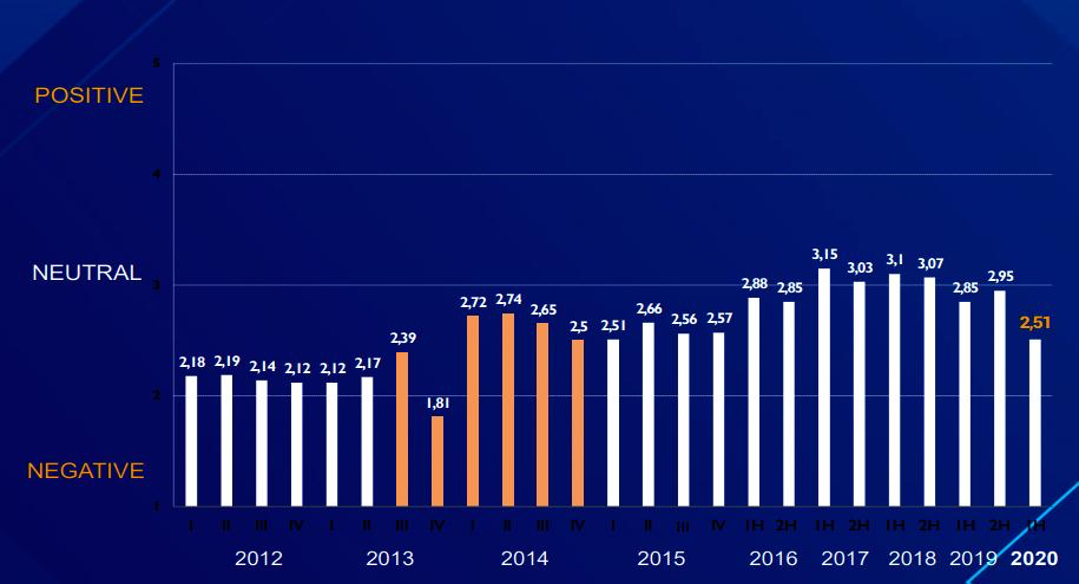 Lenna Koszarny, co-founder and CEO of Horizon Capital private equity fund, said on Jan.21 that Ukraine’s figures of foreign direct investments in 2020 were “the worst in 20 years.”

“Foreign investment inflows remain low,” said Danylyshyn. “The low speed of structural reforms and uncertainty about the prospects for the impact of the pandemic on the Ukrainian economy are holding back foreign investors.”

Moreover, investors often put their money not in the real sector of the Ukrainian economy, but in government bonds, which are considered less risky.

“Ambassadors must show the first results of their work in the economic area within six months after their appointment,” said Zelensky, Interfax reported. “No result – no job po for ambassador.”

While visiting Oman in early January Zelensky also called on Omani partners to take part in large-scale privatization in Ukraine.

A month later Zelensky called for more investments during his official visit to the United Arab Emirates. While Ukrainian delegation signed contracts totaling $3 billion, Zelensky said that at all international meetings, he calls for investment in Ukraine.

“Our state has a huge potential – geopolitical position, natural resources, and educated people,” he said.

“Our business model is based on forging strong partnerships in the sectors and geographies in which we operate, and we look forward to exploring potential areas of collaboration with DTEK in Ukraine,” said  Masdar CEO Mohamed Jameel Al Ramahi.

2. Good year for mergers in Ukraine, dramatic for investments

While for this year Ukraine’s central bank forecasted foreign direct investment recovery at $3 billion, by the end of 2020 pandemic year the decline in investment reached $420 million affecting all sectors of the national economy.
Some of them went through the real shock therapy – investments in entertainment and sport industry fell by 71%, in agriculture and education by 45%, transport – by 43% and into construction by nearly 40%.
While most industries struggle from the lack of investments in 2020, it was the perfect one for mergers and acquisitions, according to Sergey Goncharevich, founder of the Capital Times Investment Advisory. The deals were largely made in the telecom sector reaching almost 30% share.
Ukrainian food processing companies were also on the menu for strategic investors. For example, Renaisco BV, a Dutch subsidiary of Glencore International, has won Ukrainian government permission to acquire a majority stake in Avery, one of Ukraine’s leading vegetable oil exporting complexes.

The privatization of 9 state Ukrspirt spirit plants, which brought $16 million into the state budget, was another “significant event,” according to Goncharevich. He forecasted that growing retail trade in the country may increase the investment attractiveness of the country within the next few years.

At the same time, economic uncertainty will be among top obstacles for making more deals in 2021.

“As a result of limited capital and financial difficulties, business owners will try to sell their companies to strategic investors,” said Goncharevich during the Forum West Strategic session in Lviv on December 11.

But mergers and acquisitions (M&A) are not workable tools for the economy to grow, DTEK’s Strategy and Finance Director Oleg Tymkiv said during ‘The next normal: M&A in times of COVID-19 and after’ conference held by KPMG in Ukraine on March 10.

Investments into new technologies, services and production capacities – are something needed for economic development, as they increase productivity and create jobs, he believes.

“Economic growth is ensured by undertaking consistent steps to improve the investment climate in Ukraine,” siad Tymkiv. “The more interesting investment projects a country can offer and the more investor friendly its business environment is, the more investment capital businesses would be able to raise.”

Investments were mainly concentrated on infrastructure projects, such as construction of roads and bridges, and were supported by the government ambitious Big Construction program.

According to analysis by Alfa-Bank Ukraine, due to the program spendings on infrastructure showed a 10.6% rise by the end of the year. Report reads: “Spending on roads more than doubled compared to the previous year.” It was enough to offset a 18.7% drop in housing construction, UBN reported.

In 2020, over 3,900 kilometers of roads were repaired. This year the goal is even more ambitious – 6,500 kilometers. In 2021, besides road repairs the government plans to put money in construction and renovation of 500 social infrastructure facilities, Minister of Community and Territorial Development Oleksiy Chernyshov said during the forum “Ukraine 30. Infrastructure” on February 22. Among them: 95 schools, 70 kindergartens, 80 sports centers, 35 hospitals.

Overall, the amount of expected funding will be 9 billion hryvnias, while last year it was nearly half less.

Tomas Fiala, founder of Dragon Capital investment company, said during the forum that investors are ready to buy bonds issued by the government and state-owned enterprises such as railway monopoly Ukrzaliznytsia, Ukravtodor road agency, or national power company Ukrenergo.

“It is expected that the amount of investments attracted under the state guarantees will reach several billion dollars from private investors around the world. In general, the transport infrastructure is extremely attractive for investments,” said Fiala.

At the same time, there are three key factors which do not allow Ukraine to jump above 60th place in the Doing Business rating, according to Prime Minister Denys Shmyhal.

“These are: connection to power grids, bankruptcy legislation and availability of financial resources,” said Shmyhal on December 17, 2020.

According to Ministry of Energy and Coal Industry of Ukraine data, half of the country’s power grids require renovation and even full replacement.

“Currently Ukraine lags its positions among European countries in terms of the level of investments per 1 kilometer of the grid, including Romania, Portugal, Poland,” the Ministry reported.

In November last year, Ukraine made the first step towards modernization of electricity grids. The National Commission on energy and public utilities adopted the so-called RAB-tariff, a long-term tariff system aimed to attract investments into electricity infrastructure. It provides a 16.74% rate of return on new electricity assets and 3% on old assets.

However, some energy experts are sceptical about this system as it differs significantly from what other European countries have.

“It has a potential negative impact on the industry, since it creates stricter incentives for energy companies, but at the same time provides the necessary incentives for investments,”  experts say, Ukrainian news agency reported.

After the regulator’s decision, DTEK Grids, a management company of seven distribution network operators, said that it plans to increase its investments in electricity supply on average for all DTEK Grids companies by 30% compared to 2020. The company stated that investments will improve “the quality of power supply” by reducing power losses in grids and reducing the power outage time indicator

In a move to promote foreign and domestic investment, the Verkhovna Rada voted for the ‘investment nannies’ in December.

Investments over €20 million that create over 150 jobs within five years will be eligible for the government fixer attached to the President’s office – male or female – who will be empowered to cut bureaucratic red tape and intervene with mayors, governors, ministers and even the President, UBN reported.

In addition, on March 2, the parliament voted for bills to free big investors from paying value added taxation on imported equipment.

At the same time, some experts have doubts about such investment tools.

“The idea of the law of good, however, it is difficult to say whether this will not become another process detached from Ukrainian realities,” said Yuriy Hapko, managing partner at Totum law firm, Ekonomichna Pravda reported on March 9.

“To create business confidence in this mechanism, it is necessary to create stable institutions of state power and the rule of law,” he said.

While Ukrainian state officials were implementing the idea of a Ukraine’s version of Mary Poppins, EU leaders agreed on a €1.07 billion long-term EU budget for 2021-2027, which includes investment support in the digital and green transitions.

Investments into renewables as a part of decarbonisation strategy became a major trend in the world sector, even during the pandemic year.

The use of renewable energy sources (RES) has become a widely accepted way to decarbonise energy and the economy. The world invested a record $501.3 billion in 2020 on renewable power, Bloomberg reported in January. 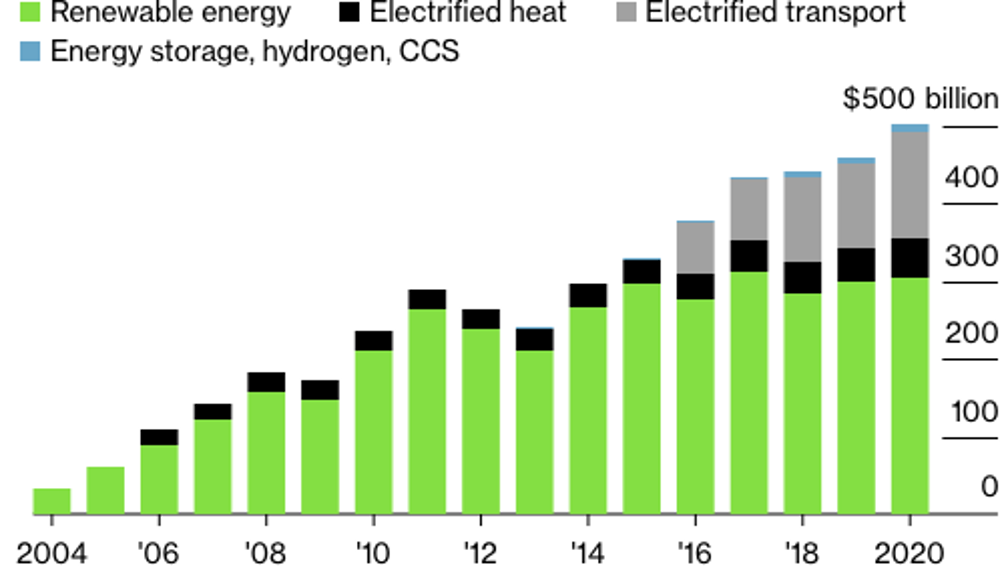 However, in Ukraine the situation was the opposite – investments in renewables decreased threefold compared to the previous year. It happened due to the working conditions of the new electricity market and the scandalous search for a compromise between businesses and government officials.

Total amount of invested money reached $1.4 billion by the end of 2020 while in 2019 investors injected a record €3.7 billion in the construction of solar, wind and biogas power plants in Ukraine adding 4.5 gigawatts of green energy production to the electricity grid. 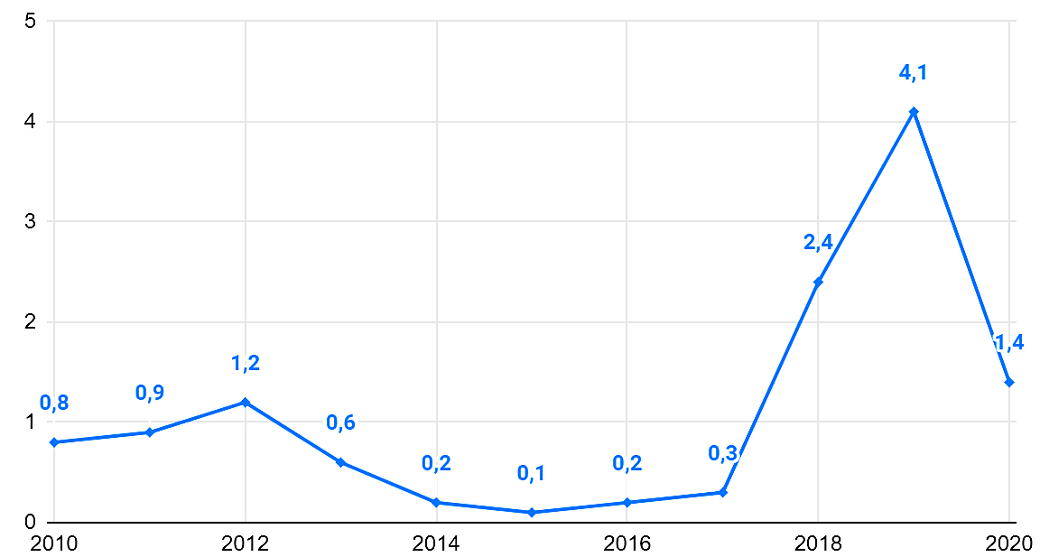 Among the most serious problems for renewable producers in 2020 were delays in payments of the green tariff (only 47% of were paid off), significant cut of “green” tariff, as well as the freezing several solar projects, according to Yaroslav Petrov, partner at Asters law firm.

“So far, hundreds of lawsuits have been filed against the state-owned Guaranteed Buyer for last year’s debts,” said Petrov, Ekonomichna pravda reported.