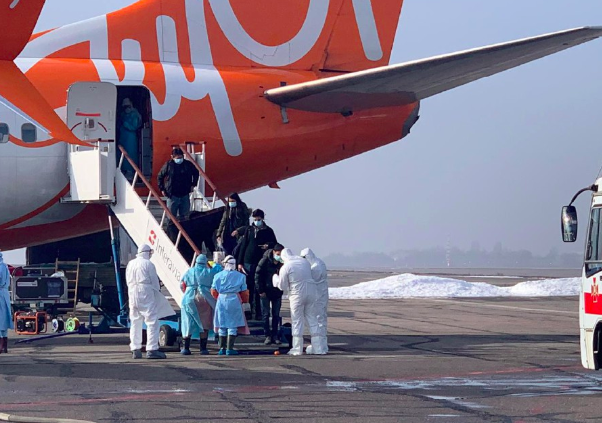 Starting today, foreigners without residency permits are barred from entering Ukraine. Starting tonight, all international flights, trains, and buses to and from Ukraine are suspended for two weeks. As of tonight, all train service stops between Ukraine and Poland, Moldova, Russia and Slovakia. Airports will only be open for cargo flights. The measures are designed to block, or at least slow, the entry of coronavirus from the EU, officially named by the World Health Organization as a hub of the global pandemic.

Almost half of Ukraine’s 230 border crossings are closed through Friday, April 3, Serhii Deineko, head of the State Border Guard Service told reporters on Saturday.  The 107 that will remain open have largely been selected to keep Ukraine exports and imports moving.

This means Polish truck drivers can drive into Ukraine. Poland is Ukraine’s third largest trading partner, after China and Russia. In one sign of cargo disruptions, Ukrainian trucks traveling from Italy are stopped on Slovenia’s western border, reports Ukraine’s Infrastructure Minister. Similarly, trucks traveling from Italy to Croatia or Hungary are not allowed to drive out of Slovenia.

In a next step, Prime Minister Shmygal asks Ukrainians to stop traveling within Ukraine as a measure to stop the spread of coronavirus. “I also ask you, very insistently…to stop travelling between the cities of Ukraine,” he said in a video address posted Saturday night on his Facebook page after an emergency meeting of the Cabinet of Ministers.

At checkpoints on the line of control with Russia-controlled Donbas, only Ukrainians registered as living in Kyiv-controlled Ukraine, will be allowed to cross. Ukraine’s Interior Minister Arsen Avakov said Friday: “We now have preliminary information about 12 cases of coronavirus in Horlivka.” Horlivka is in the separatist section of Donetsk Region.

After a 71-year-old woman returning from Poland died Friday in Radomyshl, Zhytomyr Oblast, authorities placed the entire city 110 km west of Kyiv under lockdown. In response to Ukraine’s first coronavirus fatality, authorities closed markets, stopped bus service, and started checking everyone driving in or out of the city of 15,000.

With 40% of Ukraine’s migrant workers going to Poland, the suspension of flights and trains will cause problems for many, including involuntary overstays of the 90-visa free Schengen limit. If borders are not fully reopened, farms in Poland and Lithuania will lose Ukrainian migrant workers crucial for cultivation and harvests, reports the Kyiv Post in a survey story. The National Bank of Ukraine predicts that labor remittances will decrease slightly from the current level of $1 billion a month.

Preparing for a possible Italy-size epidemic, Zelenskiy said that 2,000 infectious disease physicians and 5,000 nurses are ready to staff designated hospitals with a total of 12,000 beds. For a nation of 37 million people, he said the government is preparing this week 200,000 rapid tests and 10 million masks.

Turning to employers, the President appealed: “I personally ask business executives – if possible, allow your employees to work at home, remotely. Especially those who have children and who cannot leave them because of quarantine at schools and kindergartens.”

The coronavirus disruption of China’s role in global supply lines offers opportunities for Ukrainian companies to supply components and semi-finished products to EU manufacturers, argues Hennadiy Chizhikov, president of the Ukrainian Chamber of Commerce and Industry. “The spread of coronavirus can cause large-scale changes in the distribution of production and the creation of new production chains,” Chizikov said Friday at a business forum in Lviv. He said some EU companies are studying transferring orders for components to suppliers in Poland, Romania, Slovakia, and Turkey.

Companies are moving fast to protect employees and work flows from coronavirus, according to an American Chamber of Commerce in Ukraine and Deloitte survey last week of 111 member companies. Measures taken are: limiting business travel – 81%; providing remote work opportunities — 79%; providing employees with up-to-date information –74%; and office security — 74%. Asked about adjusting their 2020 business targets, 65% responded that they plan to maintain their targets, while 14% plan to moderately lower their targets.

More than half of German firms – 56% — are suffering losses due to coronavirus, according to a survey conducted by the Munich-based think tank, Ifo Institute of Economics. Of 3,400 firms, 96% of tourist companies were hit, followed by 63% of food processors. Ifo reported: “And 63% of firms suffer in trade. Delays or cancellations of deliveries – 66% — especially due to the cancellation of fairs and congresses, cancellation of orders.”

Saudi Arabia plans to more than double oil deliveries to Europe in April in a bid to knock Russia’s Urals oil out of the EU market, Reuters reports from Moscow in an article headlined: “Saudi Arabia set its sights on Russian oil market share – traders.” After Russia and Saudi Arabia fell out about production quotas 10 days ago, Saudi Arabia vowed to increase production by 25% in April. To sell the oil, it is offering deep discounts. Many Russians believe that Saudi Arabia’s decision to flood the world with cheap oil in 1986 led to the collapse of the Soviet Union.

The National Bank of Ukraine sold almost $1 billion dollars last week in moves that contained the hryvnia devaluation against the dollar to 4% for the week. Demand tapered Friday, hitting $141.6 million. After the banking holiday on Monday, the central bank sold $270 million on Tuesday. On Wednesday, sales rose to $350 million. On Thursday, sales started to fall, hitting $220 million.

From the Editor: With Italy reporting a 25% jump in coronavirus deaths yesterday – 368 more – it is comforting to see Ukraine moving aggressively and proactively. So far, Ukraine’s post-Independence laissez faire approach to public health has failed. Last year, Ukraine reported 57,000 measles cases – more than half the total number for WHO’s entire European Region. One week ago, on my fourth visit to a clinic, I finally was able to get my four-year-old son vaccinated for Hepatitis B and Chicken Pox. I wonder: how many parents would make four trips and pay $153 for these basic shots? With Best Regards, Jim Brooke jbrooke@ubn.news