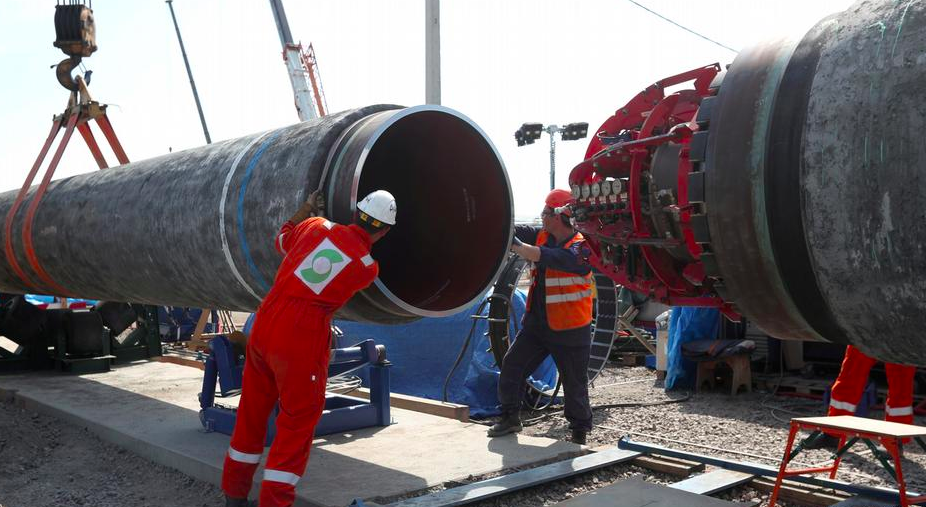 Virtually guaranteeing that Russian gas will flow across Ukraine next year, construction of Nord Stream 2 now is to stretch into the spring, a representative of the Nord Stream 2 AG gas pipeline development company told Germany’s Deutsche Presse-Agentur on Saturday. An application to continue construction through the spring is to be considered today by Germany’s Federal Office for Maritime Navigation and Hydrography. The Danish Energy Agency delayed the Russia-Germany gas line project by only granting permission to pass through Danish waters on Oct. 30.

With two weeks to go to the expiration of the 10-year gas transit contract with Russia, reports from Friday’s meeting between Gazprom and Naftogaz in Vienna indicate that Naftogaz will extend booking volumes to Dec. 31. Russian wire reports that both sides had reached an agreement caused gas prices to plunge for 20 minutes on Friday afternoon. The reports were not confirmed.

President Zelenskiy believes a new gas transit agreement with Russia will be signed. “For some reason, I can say confidently that we will sign a transit agreement,” he said Thursday night on the Right to Power program on 1 + 1 TV channel. Earlier in the week, on Monday night, Zelenskiy and President Putin discussed the gas contract at length in a bilateral meeting in Paris. Back in Kyiv, he told 1+1: “It seems to me that there is a very high percentage that we will have a gas transit contract signed.”

A cutoff of Russian gas through Ukraine two weeks from now would raise prices in Europe, but “gas supply in the EU would still be secure” this winter, says Simon Schulte, co-author of a new report by the University of Cologne’s Institute of Energy Economics. “[EU] Gas storage facilities are still almost full to capacity and gas prices are at a seasonal low over several years,” Schulte writes in the report: “The Trilateral Gas Talks: What would an interruption of Russian gas exports via Ukraine mean for EU consumers?” After Russia’s last cutoff, in 2009, the EU invested in connecting national pipeline systems and ringing the continent with LNG landing terminals. Cutting off the Ukraine pipeline would force European prices up by single digits this winter, with these exceptions: Austria and Slovenia up 10%; Romania up 18 %; Bulgaria up 24%; and Greece up 45%.

In March, the government will launch a new competition for the massive 9,500 square km Dolphin section of the northwest Black Sea. Last June, Trident, an American company, won the competition for the 50-year PSA. But the new government asserted the competition was too hurried and canceled the results. Although the government has hoped to draw international interest to the blocks, no majors have taken acreage so far, notes S&P Global Platts in an article headlined: “Ukraine to promote latest gas blocks after lukewarm interest to date.”

With almost one-third of Ukraine’s oil and gas concessions “sleeping,” the new government has drawn up a draft bill that would set monthly rent payments for oil and gas land and a procedure to revoke licenses from holders who do not develop their concessions. “It is very simple: you either extract the resource — or you pay taxes without profit,” Prime Minister Honcharuk told the Cabinet. Referring to 80 dormant licenses, he said: “In case of deliberate, prolonged non-payment, the license will be suspended, and then annulled.”

Interest rate view for the next six months, by Oleksiy Blinov, Alfa-Bank Ukraine research head: “The next rate review is scheduled for Jan. 30. We expect another strong cut then, at 150 bps. Thereafter, the pace of rate-cutting is likely to decelerate further to 100 to 50 bps, with the prime hitting 10% in summer.”

Two Chinese companies have bought the majority of shares of aviation engine maker Motor Sich, Company President Vyacheslav Boguslaev told reporters on a factory visit Friday. “I could close the plant —  I could cut down the number of employee,” Boguslaev said in Zaporizhia, according to Ukrinform. “That was the problem before me. We decided to find an investor. We were told who the investor was, we went and talked to China. The stock owners sold them through our stock exchange. And I sold my shares.” With opposition strong from Ukroboronprom and the US government, the deal is under review by Ukraine’s Antimonopoly Committee.

With Boris Johnson’s electoral victory expected to speed Brexit, a new priority will be a UK-Ukraine free trade pact, argues the British Ukrainian Chamber of Commerce. “Such an agreement should accelerate commercial integration of the UK, Europe’s largest net food importer, with Ukraine, Europe’s largest net food importer,” Bates C. Toms, chairman of the Chamber, writes Friday in the BUCC annual report. “Ukraine, as one of the world’s largest food exporters, should be a major beneficiary from Brexit as soon as a new UK-Ukraine free trade agreement applies to replace, for the UK, the restrictive EU-Ukraine DCFTA.”

Taking a step toward enjoying an EU industrial product privilege only extended to Israel, Ukraine’s Rada has approved a draft law that streamlines rules on regulatory control over non-food products. Scrapping overlapping checks and clarifying documents, the law is seen as a steep toward ‘visa-free’ industrial exports to the EU. Later this year, Ukrainian officials hope to sign the accord, officially known as the Agreement on Conformity Assessment and Acceptance of Industrial Products, or ACAA.

From the Editor: Energoatom wants to raise retirement over 60 years – for nuclear reactors. The ‘60+’ program would save lots of money, assures Yuriy Nedashkovsky, president of the Ukrainian Nuclear Forum Association. For the worry warts, The Wall Street Journal has a chipper travel story – Why Tourists Are Flocking to Chernobyl. It features a crispy salad lunch with a family who stayed on in the Exclusion Zone. Best Regards, Jim Brooke jbrooke@ubn.news.